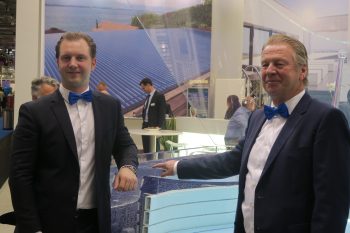 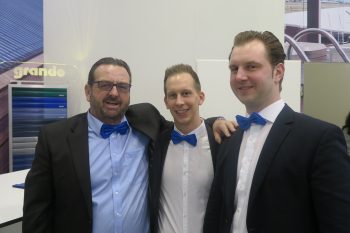 Another thing also prompted us to wear bow ties: our trade fair concept “grando digital” which, with its app, configurator and energy calculator, represents a “modern age”, in which the bow tie is becoming fashionable again. What do bow ties and grando pool covers have in common? They are “proven, traditional products” with a timeless, classic effect. So, now you have discovered the secret of the bow tie – à la Sherlock Holmes, who – what a coincidence – was one of the most famous bow tie-wearers of them all!
Aqua-therm Moscow has been a great success! Thanks to all visitors and partners!
Thank you for visiting us at aquanale in Cologne! Next edition of the show is 7 to 10 November 2017. But before grando will exhibit at Aqua-Therm in Moscow from 2 to 5 February 2016 and at Piscine in Lyon from 15 to 18 November 2016. See you!Danke, dass Sie uns auf der aquanale besucht …
Welcome to grando!
grando is looking forward to seeing you in Cologne (hall 6, D 30)! Welcome to aquanale! Tuesday we will have built up our stand for you.
21 October 2015. Today we are at the point of time to which Marty Mc Fly travels 1989 in “Back to the Future II” to the future. He expected flying cars, self-drying clothes, hoverboards and remote-control dog walkers. This is not what really exists.
Today is Evaluate-Your-Life Day. grando is using it as an occasion to reflect upon their product range and to think over new developments. What do customers need today? What developments should we expect? Will the colours, materials and styles still go well in the future? How does digitalisation influence our market?
Electric cars are still an uncommon sight on German roads, but some really stand out, like the ones from the sopra dealer. They prove that fun, functionality and aesthetics can go hand in hand with environmental protection and energy efficiency.
There are many masterminds and ingenious scientists. But the best inventions are created by nature. If – befitting of today’s Day of the Watermelon – I take a look at the red fruit then the thick skin is directly apparent.
Tomorrow is National Day in Switzerland. You can also call it “Jour de la fête nationale”, “Giorno della festa nazionale” or “Di da la festa naziunala”. There are a lot of languages spoken in Switzerland. But there is only one grando-distributor: Aqua Solar.